The shipping supercycle of the last decade was riding on the coattails of the commodities supercycle and China’s incorrigible demand for raw materials due to its investment boom. Primarily minerals like iron ore and coal (with the dry bulk market as a beneficiary) and crude oil (with the crude tanker market as a beneficiary) experienced very strong growth based on China’s strong demand, with a brief case in point of the following graph depicting Chinese iron ore imports increasing from about 70 million tons in 2000 to about 745 million tons in 2012, for an approximate CAGR of 20%.  So far, so great! 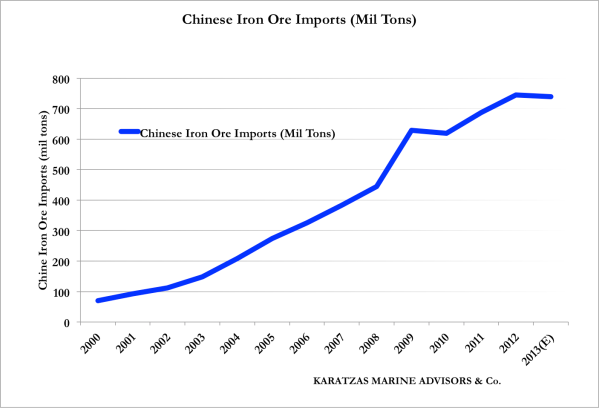 China’s growth of an average 15% annually during the last decade was primarily credit driven, and such credit expansion has now reached dimensions ‘forcing’ the hand of the Chinese central government. Total debt now stands at $17 trillion, or 210% of the GDP, although admittedly, China’s external debt is only 7.2% of the GDP. Recently, Fitch Ratings estimated that ‘wealth products’ of $2 trillion in ‘shadow lending’ are effectively a ‘hidden second balance sheet’ for the Chinese banks. Still scarier, this $2 trillion ‘shadow balance sheet’ is financed on short-term, rolling basis of three-to-six months at a time. (We all remember the ‘repo market’ and its contribution to the financial meltdown.)

The heavily construction-driven Chinese growth has resulted in many excesses in the economy (and in many other aspects of life and society, including politics.) Focusing on the economy here, residential construction represents 20% of the Chinese GDP, according to a recent presentation by James Chanos of Kynikos Associates, one of the few successful short strategy hedge funds. By comparison, at the height of the US real estate bubble, residential construction represented about 6% of the US GDP.  Even scarier, in 1989, at the height of Tokyo’s real estate bubble, real estate was valued at 375% of GDP, while in 2007 in the US, real estate was valued at 180% of GDP; by comparison, today’s price of real estate in China stands at more than 400% of GDP.

As China, at present, tries to contain a potentially ‘banking bubble’ and rebalance its economy away from investment and toward retail consumption, the impact on the rest of the world can be tangible. As Paul Krugman discussed recently in an article in the New York Times recently, China’s reaching the ‘Lewis point’ when additional capital on investment starts to generate diminishing returns (underemployed ‘surplus labor’ from the country side has only marginal contribution to the overall economic output, as new industries cannot efficiently depend on cheap, untrained peasant labor drawn from the mainland), it will have to focus on domestic consumption.  Focus on internal consumption will translate to a need for lower imports of raw materials, and as China – the largest world importer and consumer of commodities – curtails its imports, the impact on shipping, especially on the asset classes most dependable on the ‘China play’ like capesize bulkers and VLCC tankers will be tangible.

Of course, China has made a name of itself surprising the world in the last decade, mostly positively, and many Cassandras so far have been proved wrong.  Regrettably, even when excluding a catastrophic scenario of ‘bubble bursting’ and focus on the likely scenario of ‘soft landing’ with a manageable rebalance of the Chinese economy and tapering off of raw material imports, the prospects for certain types of shipping do not seem so great; there are still 80 VLCCs on order to be delivered (with the world fleet standing at about 650 vessels) and 180 VLOCs/Capesize vessels (with the world fleet standing at about 1,400 vessels).

No part of this blog may be reproduced, in whole or in part, under any circumstances, without the prior written consent of the copyright holder of this blog.