When one hears the words “Fifth Avenue”, fine shopping springs to mind. “Fleet Street” stands for the British national press and “Madison Avenue” for advertising. There are many more metonymies for other industries and professions.

And, then, there is “Akti Miaouli”.

In all out travels, it never fails to amaze us the magic touch of the word, the matter of shipping companies managing thousands of merchant ships worldwide from Akti Miaouli, the sterling address of vessel managers from where remittances and paychecks for seafarers originate, the connotation of a gilded boulevard by the port where supernaturally rich shipowners have their family offices. Akti Miaouli stands to the world for Greek shipping.

There are reportedly close to one thousand Greek shipowners and vessel managers today based in Greece. Although only 1,350 merchant vessels worldwide fly the Greek flag (vs 7,900 and 5,400 vessels for the Panamanian and Japanese flags, respectively,) according to the most recent annual report of the United Nations Conference on Trade and Development (UNCTAD), Greek shipowners top the world list with ownership of 4,200 merchant vessels and a cumulative tonnage of 310 million deadweight (while world’s second biggest owner Japan owns 3,900 merchant vessels at 224 million deadweight.) Greece controls appr. 17% of the world’s merchant fleet.

For an island nation like Japan with a large population, heavy industry and shipbuilding and a robust financial system, one can understand the competitive synergies the country lays for a massive merchant fleet. Likewise, for countries with certain competitive advantages like ease of access to capital in the United States and Germany or an extensive coastline like in Indonesia or tax efficiencies like in Panama and Singapore or massive “state support” (loosely defined) in the People’s Republic of China, one can appreciate the reasons for these countries having a great number of merchant fleets.

But Greece? Besides its coastline (appr. 13,700 kilometers, almost as long as PRC’s 14,000 kilometers, but a fraction of Indonesia’s 54,800 kilometers,) Greece has no trade, no heavy industry (or industry at all, quite frankly,) a small population of eleven million people, no industrial shipbuilding, no substantial banks or financial institutions. Trying to analyze the industry and the business environment, an economics student would have a hard time to make the case in a college class paper that Greece could ever be a meaningful player in the world of merchant shipping.

Possibly the very same reasons that have prevented Greece from becoming a world power in modern history may have propelled the country in the world of shipping. There are 6,000 islands in Greece (but 18,000 islands in Indonesia’s Archipelago,) some of them no more than a rocky speck in the richly blue Aegean Sea where life is not easily sustainable; many islanders took to fishing and fishing boats and diving (famously for sponge in the Dodecanese) and costal ferries and then international merchant ships, as ratings at first and then officers and engineers and captains. Almost all Greek shipowners originate from the Greek islands, whether of the Aegean or the Ionian Seas, and almost none from the continental, mountainous Greek. They worked hard and sacrificed a lot and risked even more, and paid their dues to climb the learning curve and eventually start buying their own ships; some British rust buckets that were going for scrap in the 19th century, many more Liberty ships in the 20th century, and many many more newbuildings at the turn of the century.

As stated in previous blog, shipping and especially the drybulk market were the textbook example of what economists define perfect competition, and the shipping expertise and hard work served Greek shipowners very well. It’s not usual to meet today third and fourth and even fifth generation Greek shipowners, just as one sees shops and businesses in England and Germany established in the 18th and 19th centuries. Greek shipowners worked very hard and “added value” – as we would say today – to the world’s trade; of course, they benefited from circumstances – some legitimate but some questionable (at least by today’s standards), but they run ships cheaply and efficiently, the envy of the world. And, their “nose for the market” to time the market prudently to buy “cheap ships” in bad times and sell them at a multiple a few years later in better times only added to their reputation as shrewd people of the sea.

It’s a miracle indeed seeing a group of business people from a small country reached such collective dominance. And no wonder that Akti Miaouli, carries such great connotations for the people of shipping worldwide. Just the east and south terminals of Piraeus’ main passenger port, with its own private club (Piraeus Marine Club) for dining and socializing, Akti Miaouli used to be where most of Greek shipowning companies were based by choice and for reputational reasons, sort of sign for “making it to the top”. There are buildings graced with names of the pillars of Greek shipping like Livanos and Lemos and Chandris and many more, and, in a sign of a truly competitive business and in-your-face attitude, the best real estate and prestigious buildings were close to the Church of St Nicholas, saint patron of seafarers and shipping; the closer to the church and the holy relics and the priest and the bishop, the closer to be to the center of things… Some religion or even superstition never heard anybody…

Like many industries in our age, the internet (and also other factors for Akti Miaouli) brought a diaspora of shipping companies from Akti Miaouli, whereby some moved to the northern and others to the southern suburbs of Athens. Akti Miaouli (meaning Miaouli Coast, Andreas Miaoulis being a Greek admiral and hero of the Greek War of Independence against the Ottoman Empire in the 19th century) is today a shadow of its old glory with only smaller shipping companies (and some service providers such as shipbrokers and adjusters and insurance agents) being still placed there.

As shipping keeps facing challenge after challenge after challenge in the last decade, some have been worrying about the state of Akti Miaouli. Yes, the shipowners of Akti Miaouli had been extremely graceful and managed to excel at handling the crises handed to them since WWII, but would the new market – where financiers opt for big corporate structures of a shipowner and charterers do differentiate in favor of big and modern fleets – still be a productive market?

I still remember like yesterday an experience from almost fifteen years ago on a cold, wet winter night with the deck lights glimmering in heavy fog, when I boarded an aframax tanker in Lake Charles, LA as a husbandry agent; the Filipino able man standing guard at the gangway, upon learning that I was originally from Greece, started asking magical questions about Akti Miaouli (where the management of the tanker and his paycheck was coming from); as almost Akti Miaouli was some sort of Shangri-La and Promised Land together, a place from where the world’s merchant fleet was transcended to the seven seas and where the streets were lined up with treasure caskets. 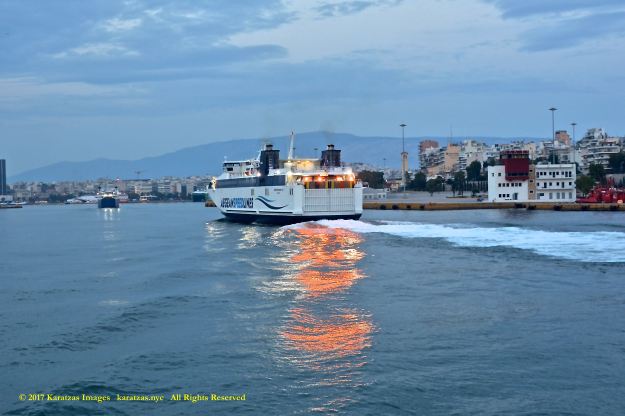